The gift is given and love is offered

It is a show of object theatre, a contemporary form of puppet theatre in which the objects come to life through their symbolic and utilitarian nature, substituting the traditional puppets. The puppeteer is visible to the audience, while he is not only operating the puppet, but is also actively involved in the action. The text is the result of collective creation of the whole group and emerges through rehearsals.
In the show entitled “The Gift”, we follow the adventure of a scavenger trying by all means to give his child the gift he promised. With the help of a friend, he will seek a solution in the world of “waste” materials. The old objects will come to life and then change into animals, humans and in whatever our imagination allows us. Will he be able to give his daughter the much desired gift? To fulfill the promise he gave her? What is the real value of the gift? Is the gift given? What role does love play in all this? Can love be offered as a gift?

The National Theatre of Northern Greece is currently the country’s largest theatrical, as well as cultural organization, in broader terms. Comprising of 4 winter venues, 2 open-air theatres, and also organising Greek and international tours, it functions as an active cultural core since 1961.

The NTNG Children Stage, founded in 1977, but also the Youth Stage, founded in 2003, present on an annual basis performances of high aesthetic qualities for children and teenagers, that aim not only at entertaining, but also at bringing the children in touch with monumental texts, introducing them to theatre art, infusing them with important messages and nurturing mature adult spectators.
The NTNG Drama School provides full theatre education and works as an incubator for young actors since 1973.

In parallel with its entertaining and educational role, the NTNG also accomplishes a social work that corresponds to the needs of the society and the citizens who don’t have access to the theatrical praxis for several reasons.

Since May 1996, the NTNG is a member of the Union of Theatres of Europe and a member of its directorial board until 2013. In the last years, the international presence and activity of the NTNG, not only in Europe, but also in the fragile area of the Balkans and the South-Eastern Europe, was strengthened with the staging of performances and co-productions at important European Theatres. 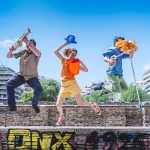